The first parkrun of October drew the biggest attendance since the last week of April. 122 turned out to run, jog or walk the course on the day that parkrun internationally celebrated its' 15th anniversary. The first ever event ,held in Bushy Park, West London had 13 participants. This week it attracted a crowd currently reported at 1,838 although there is possibly an issue meaning there may be more to add in! I don't envy the finish line volunteers , be they on tokens, scanning, timing..etc. I often hear it said that it is a well oiled machine process, and understand that..but I still don't envy them! 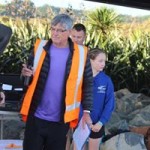 Which leads nicely into acknowledging our own team of volunteers this week. Led by Run Director Colin Smith, thanks go to him and his team: Mark Anderson; Ron Crowhurst; Jan Sherley; Jim Kettlewell; Sarah Gibby; Stuart Kain Emma-Jane Matthews; Nigel Stewart; Hayden Bell -more about him shortly and finally Donna Bird. Special mention for Donna who has recently undergone an operation and won't be able to run for a while..so she has opted to stay involved in parkrun by volunteering. Many thanks Donna, that is much appreciated, and we wish you well with your recovery!

Hayden: One Hundred ...and Twenty Five...plus one!! 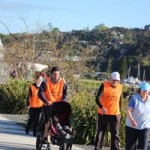 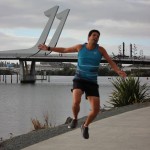 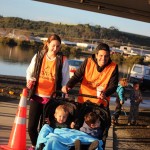 What a week for stalwart parkrunner and Hatea Harrier Hayden Bell. He carefully planned to coincide two elements ...but! On Friday he and wife Karen welcomed baby Charlotte. Then yesterday Hayden in his volunteer  role as Tail Walker ensured that his 100th parkrun coincided with his 25th occasion as a volunteer.Hayden's first Whangarei parkrun was back in December 2016, when he followed up his first run with 5 consecutive PBs!!He therefore earned the black and purple milestone parkrun shirts on the same day.

Often seen at Sport Northland Events, and a regular entertainer with his star jumps, he is a popular part of Whangarei parkrun! Many congratulations Hayden on your milestone achievements as well of course as to yourself and Karen on the birth of Charlotte. 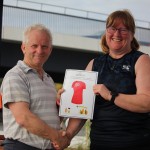 Before the start this week Helen Brereton was presented with her certificate for completing 50 parkruns. More about Helen shortly, but congratulations just on this achievement for the moment!

Two junior parkrunners completed their 10th run which is a milestone event for them-congratulations Aiden Harris and Keisha Gutterson. 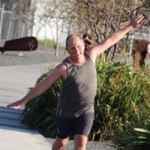 Assuming they participate next week, Colin Smith will become a man in black by earning his 100 parkrun shirt and Mark Lewry will claim a red milestone shirt for completing 50 by running...and walking occasionally! Will he celebrate with cakes? Pies? Both? (Just joking!)

Absolute coincidence, but on parkrun's 15th Anniversary we had 15 first timers here this week. That included two 'parkrun Tourist Groups' who were both NZ based. The Register family from Greytown comprised Ava, Brent and Kim. Kim was completing her 4th different NZ venue, The second group were from Hamilton Lake : Amelia; Chuck and Oscar Kepa together with Belinda Kane.. Hopefully you all enjoyed your visit here.

That leaves 8 others who chose to start their parkrun journey , their first run, here at Whangarei on Anniversary Day.Hopefully that bodes well as we welcome :Leigh Grant ; Adrian Gilmour;Lisa and Emma Worswick;Tammy White;Nathan Barnes;Sunel Ferreira; and Alan Smith. Getting the first one done is often the biggest challenge- we hope you enjoyed it enough to want more!!

This week 26 of you recorded PBs...thanks for giving me typing overload!! Seriously, that is wonderful, better than 1 in 5 odds!Somee of those warrant special mention first of all Doreen Robertson in her 16th parkrun. It's her first PB since January, and what's remarkable is the age group she competes in is 80-84! We have some amazing people here , staying fit. Congratulations Doreen!

Helen Brereton:what's going on? Not content with a 50th milestone, now 3 successive PBs? Well done you!

Then there is Kirsten Blake running here for just the 3rd time, recording a PB and leading the ladies home. 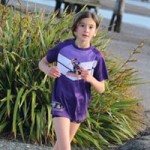 A good day for the Pickerings: John had a PB as did young Jorja-recently seen in a popular Scottairplanes picture a couple of weeks ago. Likewise the Pickfords: Brett and Daniel both set new marks.Mustn't miss the Hawkes- well done Josie and Amanda.

Joseph Walsh and Emma Formoy will have been a happy household with both achieving new PBs this week. 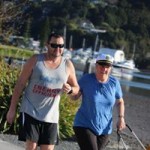 Jacqui Gardner (pictured) walks with a guide, and achieved another PB this week-well done!

Congratulations one and all of you achievers!

Congrats to Shiloh on leading everyone home for the second time. The last time was in October 2018. Steve Cowan spoiled a sequence of three consecutive third places with his fastest time since April-well run! 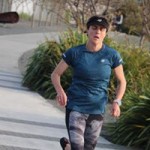 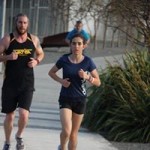 If they are all here I could almost write this in advance, such is the consistency of: 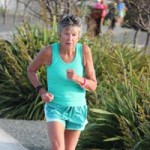 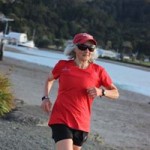 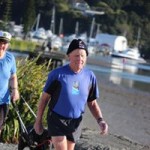 Must give a mention though to Kirsten Blake who ranked 4th with an impressive 78.34% 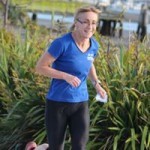 Oh dear! Bite the bullet and own up time.. Having suggested and  published the idea, I failed to make the start line at the appointed time. How embarassing was that? Fortunately I had a saviour, who was was none other than the lady who is victim of so many jibes about timekeeping...Denise Limby! In all sincerity and seriousness Denise, I can't thank you enough for stepping in to cover for my situation, caused by changes to my  flight home from Christchurch yesterday. 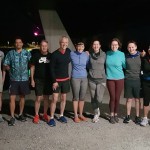 A small group gathered for Whangarei darkrun and I understand a thoroughly enjoyable event resulted. Denise very kindly provided a celebratory cake. The night was made memorable by a visitor from Hamilton , Joseph Morgan, who ran the course in 16:01 which would be a course record. Of course it being a Freedom Run and an unofficial event it will not take the official title, but nonetheless it is a stunning time and we congratulate Joseph. Incidentally his brother Adam also ran and was not far behind! (Apologies, the picture is badly cropped, but you get the idea!) 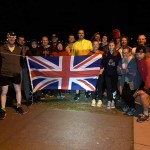 Whangarei was also the catalyst for a South Island darkrun at Pegasus which was very successful and included a live link with Market Harbororo parkrun in the UK . Quite a day down there with the celebration earlier in the day of the completion of 500 parkruns by Steve Darby, the first time that has been achieved by anyone outside the UK.

Quite a week then, I think that's all. Your run director next week will be Ron Crowhurst. #Loveparkrun