It's Still A Buggy Life!! 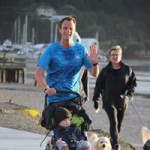 Hello! Me again. The one in the buggy from last week! I know I was only supposed to make one appearance really but...Well I just needed to come back and thank all my fans who 'liked' me last week and let them know that I will be coming back from time to time, making guest appearances and giving my view. Please don't think success has gone to my head. It hasn't. I've been far too busy with my new Facebook and Instagram  pages and Twitter account (@Buggypassedyou) I thought I was going to be able to tell you about my free Water Ride this morning, but the rain relented and it was just the usual white knuckle jaunt. Well it almost was. Except that something strange happened at the finish. Usually everyone is watching whats happening with people crossing the finish line but today? They were behaving very strangely. Lots of people seemed to be paying more attention to one of the toilet doors than the finish line! Beyond me! But what do I know? Oooh- except did you see that Ange Brearley lady? She was pushing her buggy very fast! I want to be in her buggy next time...

It's adult time now, but as I promised , like Arnold Schwarzenegger...I'll be back!! 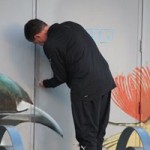 So, the last parkrun of July 2019 was eventful with all sorts of comings and goings and even a mini-crisis! A deluge threatened, but never really happened so 85 Runners,walkers, joggers and yes buggy pushers again, completed the course. Of course it should have been 86! It so should have been 86. But our poor Maureen was....well...indisposed do we say?

What can a girl do when she pops to the ladies just before the race brief is due to start. She tries to unlock the door and finds it's stuck. Obviously she calls for help.  Despite strenuous efforts, the door could not be shifted. A monumental decision was needed and made: The show must go on!!

Poor Maureen was marooned in her 'cell' whilst her parkrun friends ran, walked jogged carefree round the usual route.

3 of them were visitors, so they can be excused! We welcomed David North who normally runs at Cornwall Park in Auckland. Today was his 314th parkrun , and Whangarei I believe is the 24th New Zealand venue David has completed. He only has 5 more to do to complete the current set of 29...although new ones keep being added! Congratulations David, hope Whangarei rated highly by comparison with the others!

3 newcomers were here for their very first parkrun experience: welcome Quentin Hill; Briar Hart; and Sarita Engebrecht. Hopefully your experience was far more enjoyable than Maureen's this morning, and we'd like to think you will come back again!

Words fail me here! While someone you know is locked up, unable to escape, you go and run round the course faster than you have managed before?? Unless you were running for help immediately you finished, I am shocked!!  8 of you did exactly that however: completed the course in your best ever time and when you finished poor Maureen was still locked in. But please don't feel guilty!! I have no choice but to name those involved: 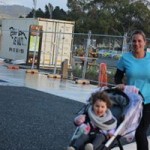 -Peter Winton: he got his first PB since 26th January

-Ange Brearley: she was pushing a buggy and still got a PB!! 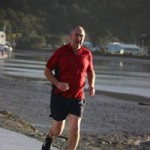 -Ethsn Gemmell and Andy Briggs(pictured)? Their second outings, and both improved on their initial run times.

-Finally a special note about Michelle Hollinger who first ran in November '18 and recorded a time of 40:58. Today she came back for her second Whangarei parkrun and clocked 34:10! That's some return Michelle, congratulations and welcome back!

Joking apart,well done to all who achieved a PB today!

Petra will be moving South today to start a new role based in the North Shore ,Auckland. That's close enough that occasional return visits will be possible, but our loss is likely to be Hobsonville's gain. Good luck for the future Petra : you made your mark in your short time here and will be missed by your running friends here in Whangarei!

There were two groups of these:

Without them, there is no event, so big thanks go to Run Director colin Smith and his team of: Shane Brearley; Anna Gray; Grant and Annmaree MacGregor; Helen Jagger; Emma-Jane Matthews; Ron Crowhurst; Jan Sherley; Donna Bird; Tina McLean; Jim Kettlewell; Kerry Reyburn and The Reporter. 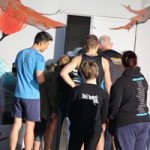 Not quite Scott, Virgil, and the rest of Thunderbirds, but lots of willing volunteers trying to help our 'Damsel In Distress' to escape captivity! Too many to mention, but thank you to all who tried, and ultimately succeeded freeing Maureen! There will be no jokes about how many parkrunners does it take to mend a broken lock!! 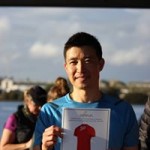 There were none this week, but  a certificate was presented to Tae-Choi Kim recognising the completion of his 50th parkrun last weekend.

Remember next week Sarah Garner will be tail-walking her way to a double milestone: 100 parkruns and 25th volunteering occasion. Please come along and congratulate Sarah on a wonderful 'double'

Today was the last run of July, a month which has seen 377 people complete the 4 events held. That compares with 259 last year, an increase of nearly 46%!Figures were up for every individual week. 56 people volunteered over the 4 weeks, compared with 34 last year. Thank you, all of you!

That's it for another week, one which saw the welcome return of one Mark Lewry, the ultimate escape, unharmed ,of  poor Maureen Kettlewell. And yes, somebody wandering around chuckling, singing that old children's song about 'Oh dear what a calamity...' Anyone remember it? I will say no more!  You know who you are!! 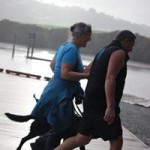 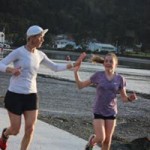