Even before the alarm clock buzzed I was woken by the wind buffeting my room. Yay, another wonderful windy wellington day and yay for Porirua parkrun at Bothamley park, probably the most sheltered pakrun in the country. No matter how you are feeling it is always a boost to turn up and see the friendly faces of the volunteers and sense the buzz of the crowd as they get ready for their run or walk. Today the race briefing held something different, our race director, David Sinkins, himself was celebrating a milestone 250 runs. Congratulations to David and to the other milestone achievers too.

The council had been at work at Bothamley and conditions underfoot were firm and dry. Running the uphill leg I was once again reminded how sheltered the course is. The friendly marshal at the slip just after the 2 km mark was doing a stellar job, and it was just past here that I met the frontrunners already heading home. It was great to see the orange cone in the middle of the road at the 2.5km point, just round the cone and it is downhill all the way home. I love the downhill leg! I rounded the last corner and headed down to the chute, the friendly volunteers were at their post timekeeping, handing out tokens and scanning barcodes.

Hanging around catching my breath afterwards it is so lovely to hear the encouragements and congratulations given, discussions of how the run went and chatter amongst little groups. Porirua parkrun truly is an inclusive, friendly and encouraging group.

Another parkrun done and dusted and another great start to the weekend.
Teresa Pohl

This week 199 people ran, jogged and walked the course, of whom 22 were first timers and 22 recorded new Personal Bests. Representatives of 17 different clubs took part.

The event was made possible by 10 volunteers:

Saturday dawns grey but humid. It’s my first parkrun of the New Year after being on holiday, I promised myself I’d be a parkrun tourist but the while the spirit was strong the flesh was weak and I’ve still to make my debut at Christchurch (or practically anywhere else for that matter).

Familiar faces line up at the start. The briefing is given and we’re off. Dry conditions on the course this week creates dust which billows up from over a hundred pounding feet. Later when I get home I will be able to write my initials in the layer of dust on my lower legs. 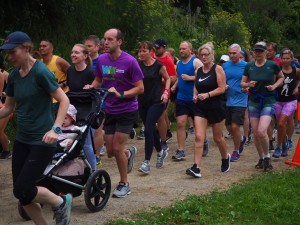 At the 0.5km mark a bemused beagle and owner watches the procession file past. I’ve seen them before. I wonder what the dog makes of this weekly pilgrimage. Does it enjoy the sudden influx of people or does it throw his schedule out of sync.

Just before the 1km marker there is an incident. A young boy almost slips towards the banking of the stream. He’s fast and rescues himself before he is hurts or falls further.

Heading towards the 2km mark I can feel the incline of the track. It’s at the 2km marker where I am passed by the runleaders on their way back to the finish. In third place is a man with his daughter in a buggy. Her face is serene as she laps up the scenery zipping past.

The field thins out. I like this bit you hear the birds singing. Encouragement is shouted from those walking up. A child that has just learned to speak yells an experimental “ellllooo” from their buggy. 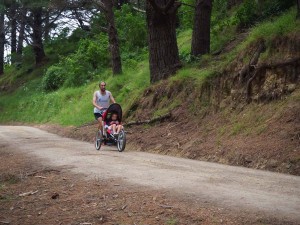 On the way down I watch the rhythm of the feet of the person in front to get a meditative state going. It’s the homeward straight. Nick is stood on the corner shouting encouragement. “Nearly there”. I reply, “Can you read my mind?” He replies,” No your face.” Which is sweating and bright red.

And then the photographer is snapping and I can see the high-vis jackets of the finish. And that’s 5km done. I collect my timing chip, record my time (thanks volunteers) and then give it minute - to recover. 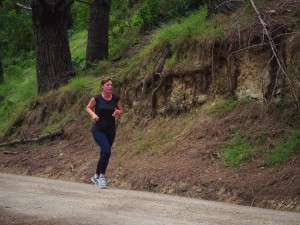 This week 194 people ran, jogged and walked the course, of whom 11 were first timers and 25 recorded new Personal Bests. Representatives of 13 different clubs took part.

The event was made possible by 14 volunteers:

My name is Helen and I am an addict. 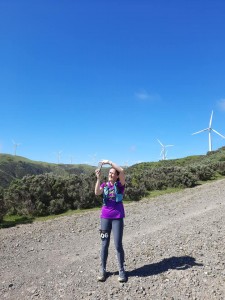 When I nervously turned up to my first parkrun back in July 2016 I never realised what I was getting into. At first it was just a recreational thing. Just a little 5km taster which led to a few more kilometres during the week. Before I realised what was happening I was signing up to do longer and longer events. You could say parkrun is a gateway drug. 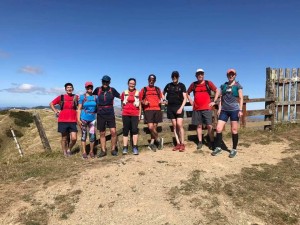 Despite this, parkrun will always be my first love. I turn up nearly every week. Even in torrential rain, freezing temperatures, tired, injured or hung over... it truly is an addiction. The buzz I get from running or walking with like-minded people cannot be compared to anything else, not even the post run coffee. 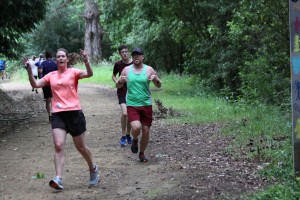 This morning you could say I overdosed a little. Recovering from a minor running injury I told myself I was going to walk... with maybe a tiny jog to test out the legs. It was never going to happen. Before I knew it, herd instinct took over and I ran the whole way. Oops! But the companionship, support and concern I get from my fellow parkrunners (should you be running, Helen?) tells me all I need to Know.
Parkrun is my family and this is an addiction I never want to recover from. 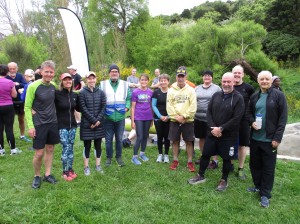 This week 153 people ran, jogged and walked the course, of whom 11 were first timers and 24 recorded new Personal Bests. Representatives of 11 different clubs took part.

The event was made possible by 13 volunteers:

Today’s parkrun was event number 378, the first official Saturday parkrun of 2021. The day started off with a very early morning earthquake and a bit of drizzle. Perfect conditions at Bothamley though - very still and drizzle cleared. It also marked my 100th parkrun – 100 Saturdays over the course of just under 3 years; sounds like a lot but if you don’t count down it goes by quickly. 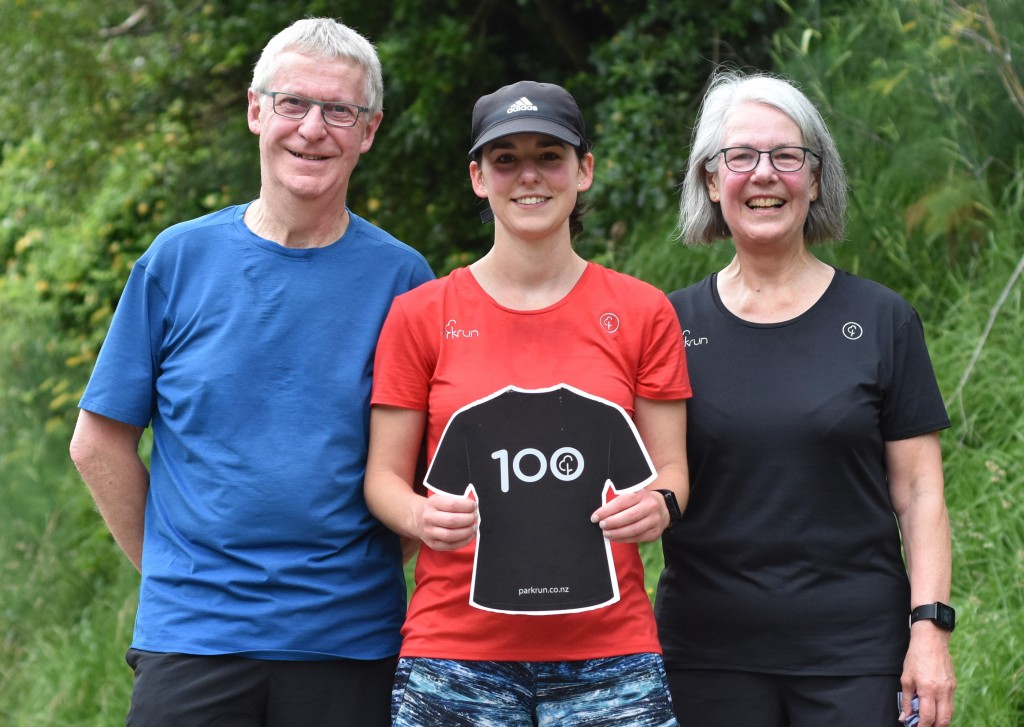 There were 121 of us running and walking today. We kicked off with the briefing before watches were set and music chosen and we were off. There were a few of us who had also done the bonus new year's day parkrun yesterday so tackling the second km hill was a bit of a challenge on day two. Everyone was flying back from the turnaround mark. A couple of runners overtook me on the way back and they were too fast for me! As I cooled down walking back up the track to encourage others lots of people congratulated me on the milestone. The friendly nature of everyone is one of the best things about parkrun. Over the years since I started everyone has been really welcoming and encouraging and you look forward to the friendly faces each week. Big thanks to all those who’ve made it such an enjoyable event every Saturday morning and to all those who volunteer making it possible. Look forward to seeing everyone again next week!

This week 121 people ran, jogged and walked the course, of whom 15 were first timers and 9 recorded new Personal Bests. Representatives of 8 different clubs took part.

Parkrun 2021, continues around the world, through us, family and friends.

OMG. We made it! Its 2021. I don’t want to sound like a skite, but … LOOK AT US NZ and THE WORLD! We see other parts of world struggling with a new strain of the COVID virus. We have family in London who are in a tier 4 lockdown. And for today we celebrate by doing Porirua parkrun with friends, family here and for those we love overseas. We celebrate to spread the love of parkrun. We turn up to see and catch up with good friends we have made in the last 4 years. My partner and I get to celebrate every week at parkrun, Porirua. Each week we tell our family and friends that we have gone to parkrun and now his daughter is joining us. Other friends and family get use to hearing us do and share in parkrun in different parts of the country when we get to travel and be on holiday when visiting friends and family. So far we have done the Taradale PR a couple of times, the Gisborne PR and now have family who live 10 minutes from Bushy park in London, running the infamous parkrun.
Porirua is our homeland parkrun. Today on the 1 st of January 2021, we celebrated with another 90 something people who came to run, walk, stroll, and enjoy the bush run. The “old road” as its affectionately spoken of by some locals we know, has brought many friendships and the place of getting to know each other each week.
Parkrun brings people together. My birth dad Tony, who lives in London and 10 minutes away from Bushy park, came and ran with us at our parkrun 3 years ago. His son (my brother Ben) is living in Wellington at the moment after spending 2020 in NZ, working and travelling with our younger brother Will. And Ben will have to eventually come too. You see we are creating a revolution and we had no intentions of doing so. We just thought we were turning up to jog, stroll or walk. And its becoming a extension throughout the world.
Every Saturday morning is where all our friends and family know where to find us. My birth dad had me register him in NZ and now runs in Bushy Park over their Level 4 lockdown. My partner Joe and I have run 100 parkruns now and our infamous 100 black t-shirts are headed their way. You see we have started something. The other day my brother Ben came over to visit us before Christmas. Via a face to face messenger call with our Dad and his wife Sarah, we decided as a group that Joe and my 100 t-shirts had to go around Bushy park with them. Like a good omen. So on this day, the 1st January 2021, we have photos and a video to show us them running around Bushy Park with our new parkrun t-shirts.
You see today is a celebration. We all turn up every Saturday to run in Porirua, NZ. And we turn up on special occasions like today and Christmas eve too. This is where you will find us. Yesterday I read a comment somewhere on the Porirua facebook page of a man who had come a year ago from the UK. It seems that he is back there now and said he loved our parkrun. My take on his comment was that he was grateful to have come to our parkrun in Porirua and knows that we are lucky to be able to gather and keep it up. When you come to parkrun, I can say that actually you don’t know how benefical this will be in the future for others in your life. Joe and I have recently moved to Ōtaki, and look forward to this year, volunteering and running in the new Ōtaki parkrun. We celebrate this New Year for everyone here in NZ and the world. Kia kaha friends. Come and gather when you can.