The one where Michelle Malone ran her 400th parkrun.

Although Michelle MALONE had to wait an extra week to complete her 400th run on Saturday (following last week’s regional cancellation), Michelle became the first homegrown female to achieve this amazing achievement. 2,000 kms of parkrunning. How impressive is that! Congratulations Michelle.

Michelle tells me that after a couple of weeks of husband Mark turning the lights on early on a Saturday morning and waking her up, she decided she may as well join him at this new thing called parkrun. This was back in May 2012. Now, just over 9 years later, Michelle and Mark have completed a staggering combined total of 840 parkruns. 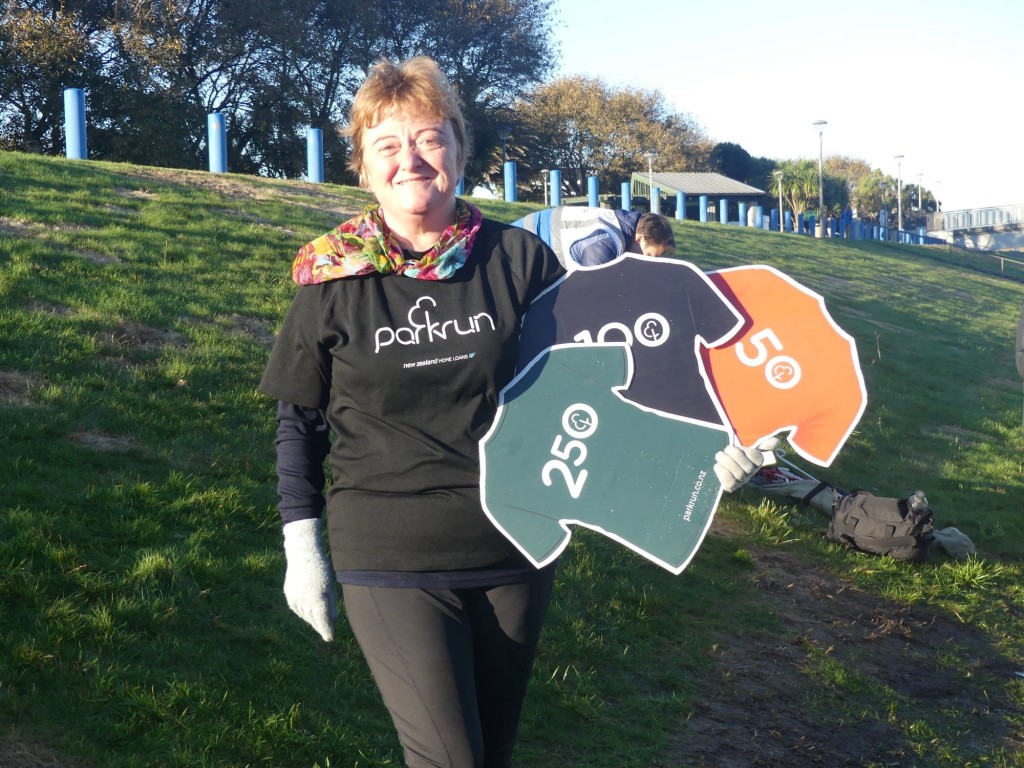 Andrew TEMPANY, Jon WILLIAMS and Kahurangi GRAHAM chose a coolish morning to join us on Saturday. Hopefully, this is just the start of a long and happy parkrun journey.

We also welcomed these parkrunners who were visiting Lower Hutt for the first time, Brydie MATHESON, Zac BACON, Megan BENNET, Sara BOEYEN, Sarah RICEMAN and Katherine WOODS. I hope you enjoyed yourselves.

Two of our parkrunners earned themselves new milestone shirts on Saturday.

Natalie MCNAUGHT ran her 100th parkrun this week. Natalie has run the Lower Hutt course 92 times and completed 7 other NZ courses. She has also run 1 UK course. Natalie ran her first parkrun in February 2015, so it’s taken a little while to get to her 100th parkrun, not that that matters of course. I have a theory as to why it has taken that long though. Maybe it’s because Natalie in 5 years has only run 1 August event. I’ll be checking to see if Natalie can add to her August tally next month! Congratulations, Natalie.

Emily MUSSON completed her 50th parkrun this week. Emily ran her first parkrun in January 2019 at Event #357. It appears that Emily has quickly become a parkrun tourist having run Lower Hutt 33 times, Hagley 6 times, 6 other NZ courses and 5 Australian courses. Well done on your achievement Emily.

This Week's Volunteers Were

As you will be very aware parkrun relies on volunteers to complete these tasks every week. There is a lot to be gained by volunteering occasionally. The tasks are easy and on the job training is provided.
If you would like to volunteer but want to run or walk, consider one of the above underlined roles. You can earn a volunteer credit and still add to your run tally.

On Saturday in New Zealand there were:
34 Events
3,400 Finishers (you work out the average per parkrun!)
399 Volunteers
171 Completed their 1st parkrun
26 People volunteered for the 1st time

It’s interesting looking back to see where this parkrun journey has taken us.
For the 9 Lower Hutt parkrunners who completed their 34th different NZ parkrun on Saturday, at the brand new Sherwood Reserve parkrun, the journey has taken them all over the country, ticking off events one by one.
For me 10 years of running coincided with my 300th run on the Lower Hutt course this week.
But, as we all know, it isn’t just about the running, it’s as much about the fantastic friendships that are made on this amazing parkrun adventure that I’m the most thankful for.
Bruce McCardle
Grateful parkrunner