Fascinating stuff, visiting a different parkrun and seeing how they do it. Lower Hutt runs like a well-oiled machine, being New Zealand’s oldest parkrun and all. For me, an Aucklander, it was a bit like doing my Bushy pilgrimage! I’d heard about Lower Hutt for so long, from fellow Western Springs run director, Kent Stead, and had heard of Richard McChesney, now walking crazy far in England, who was the original event director. So, earlier this year I was excited to find out that the professional development group I am
involved in through work was assigned to meet in Wellington, not once, but twice in 2021. I knew without a doubt that my first trip down would be a chance to pay homage to Lower Hutt. I was delayed two weeks by Covid rearing its ugly head, but luckily the work trip was postponed and so I quickly rebooked the hotel and packed my barcode!

A few days before leaving for Wellington I sent a message on Facebook to see if I could catch a lift with a parkrunner from the city centre. Thinking that plenty of parkrunners would live further south than the CBD and travel north to parkrun, little did I imagine that Peter Murmu, a recent addition to the run director team, would backtrack miles out of his way to pick me up AND be willing to drop me back again afterwards! Thank you so much, Peter, I enjoyed our parkrun-related and other chats. And that huge gesture of hospitality and generosity was not alone. While I got the feeling the core volunteer crew are very familiar and close, Mark and his team were certainly welcoming to a newcomer, and I felt right at home. I did get side-tracked admiring the sunrise over the river when I realised I’d almost missed the first timers’ briefing, but I dashed over and the volunteer was happy to repeat himself for my benefit.

After a newsy and informative run brief from Mark we set off, and I could see the use of a dual start line in action – very cool. A bit nervous about running the whole 5k, I set off at a steady pace thinking I’d walk later if needed. Enjoying the feeling of running in a crowd, I was jogging along when I was greeting from the side by a friendly runner with something like “You’re a visitor from Auckland, aren’t you?” I looked around and saw a young woman with a very friendly face. Yay, conversation! I’m always keen to pass the pain of parkrun with a bit of chatting and swapping of stories. Meeting Katie this way was a stroke of luck as we easily kept up a pleasant talk the whole time, under bridges, past the returning speedsters, across the grass to the turnaround, and back the way we came, even through the part when my knee started protesting at about 3.5k. We just kept up our conversation right to the end which took my mind off any reasons my brain was concocting to stop and walk! So I ended up with a much better time than expected, thanks Katie. At the finish I met her husband too, and we walked together over to the Buzz Café to enjoy a well-earned and tasty breakfast. I was humbled when Katie and Svend insisted it was their shout. Again, what a welcome from the locals! 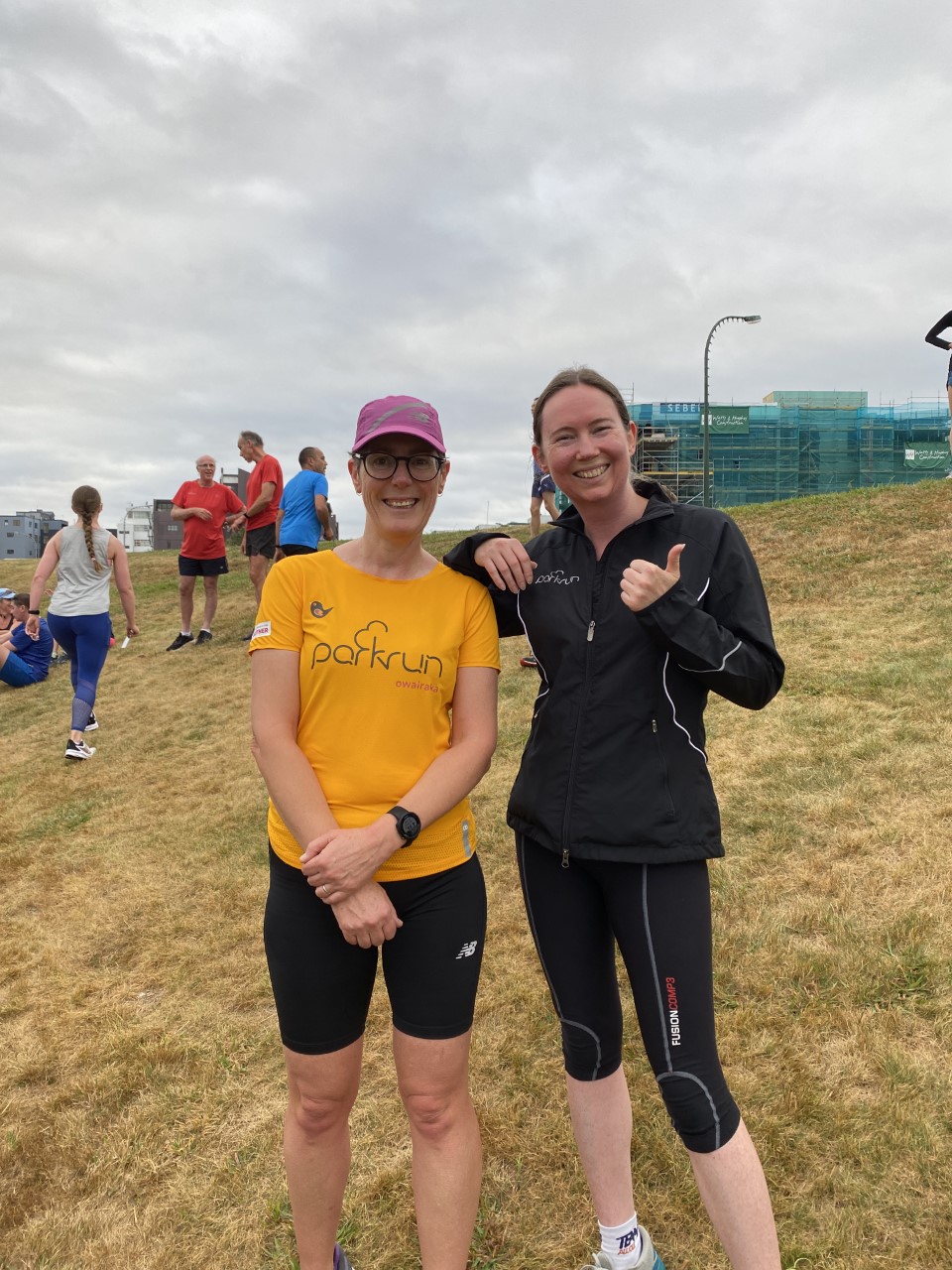 I’d better write something about the parkrun itself as well! It was a huge affair for me, as I’m from Owairaka parkrun in Auckland which only started up on October 24 last year and is averaging just under 100 parkrunners per week. This week Lower Hutt saw 222 runners, walkers and joggers, and it was exciting to be in a crowd again. The flattish course provided a fast time up front with 17:02 by Andrew Rutherdale, who chose placing first as a unique celebration for his 100th run. A quick check of the stats shows this is actually his 10th time to head the field and only 4 seconds off his PB, so a smashing morning for him! He did well to hold off Walter Somerville in second place by 8 seconds, and Nathan Martin with a PB in third trailing by a further 10 seconds. A close finish for the men, but not so much for the ladies, with Sally Hale out in front at 22:03 followed by Holly Couch in 23:26 and the crazy-as fast under-10, Connie Reed, in 24:27 - a new PB to boot! Well done to all of today’s finishers, including all 33 with shiny new PBs!

A run report would not be complete without noting the milestones, of which there were many. Out of seven, though, the most note-worthy of all was undoubtedly Lizzi Elton-Walters achieving her incredible 400th parkrun. The lovely carrot cakes were in her honour, but it was a bittersweet celebration as it was also Lizzi’s second to last parkrun in NZ before returning to the UK. Go well, Lizzi. In addition, there were the following other milestone: previously mentioned first placer, Andrew Rutherdale (100), Caroline Williamson (100), Deanna Aguila (50), Lexi Falconer (10), Tabitha Zielinski (10) and Olivia Crosland (10). Nice to know those they will all, juniors included, be able to pick up their milestone t-shirts in due course from the UK for a reasonable price!

One last word of thanks to the volunteers, for they make it possible for the rest to run. They are the ones who are in on a little secret, that volunteering at parkrun gives you even greater warm and fuzzy vibes than running does! So don’t hesitate to give it a try. Appreciation and thanks go this week to: Martyn Cherry, Julie Collard, Andrew Crosland, Margaret Donovan, Naomi Dunwoodie, Bill Emmens, Mary-Ann Janssen, Alison King, Mark Malone, Ian Morton, Peter Murmu, Alex Turner, Robert Turner, and Glen Warner.

What a great weekend I had in Wellington and Lower Hutt. A friendly lift to take away the stress of getting to an unfamiliar place in time, an entertaining friend to converse with as we ran and take my mind off the hard yakka, and a wonderful time at the café after. The icing on the cake was that it was also my long-awaited 15th different event in New Zealand, which gets me on to the leader board, yay! So, while the weather at 8am was chilly and grey, the welcome for me at parkrun was anything but! This warm hospitality was unforgettable. I would love to see my newfound Lower Hutt friends at Owairaka parkrun in Auckland where I can repay the favours I was blessed with and show off the beautiful course and café there!