It was one very cold morning when it warmed up not long after parkrun finished. There were 101 parkrunners and 20 volunteers in attendance braving the conditions this morning. It was my first parkrun in New Zealand that starts at 9am, which only happens during NZST, otherwise I have done an international parkrun in England where all their parkruns start at 9am. Having accomplished this new feat of collecting the letter ‘I’ for the first letter of this parkrun name is a great achievement towards the alphabet challenge. The 8 marshals on the course is a great asset to this course as I was not sure on what the course layout was like until the run started.

As it was a 10 minute walk from where I was staying, it was a great advantage on getting to parkrun early. Coming from the Wellington region was a big change to come to the deep south after spending less than 24 hours here. When I was last here 16 years ago, there have been some changes to the areas that I navigated today. Although this parkrun isn’t the most southern parkrun worldwide (correct me if I am wrong on this), it was an impressive achievement to have done a parkrun in the Southland region here in New Zealand. There has been talks of Gore parkrun commencing or had been consulted, but sadly the course was flooded and is in the progress of being repaired. Hopefully there will be some great news on the start date soon.

There were 11 first timers to the course. 4 of whom did their parkrun here for the very first time and hope to see you again anytime soon. They are as follows: Rex LIU, Emma TODD, Jenny LIU and Joy WO. The rest were tourists from Wellington, Christchurch and Tauranga. This is most likely the first parkrun that I have participated in which has no unknown athlete recorded towards the results. So big congratulations to everyone. 9 personal bests were recorded and no parkrun milestones were achieved today.

The tour pack that consists of the Runs with a Barcode book arrived at this parkrun by Stephe Crowther from Tauranga parkrun and now someone has the duties to pass it to a parkrun where the book hasn’t been yet. We are looking forward to seeing where this book ends up next Saturday on the last day of July. School holidays are ending this week and we are approaching the new month soon and also it means that winter is almost over. Time flies very quickly. Photo below of event director Liz Henry and Stephe Crowther of the book. 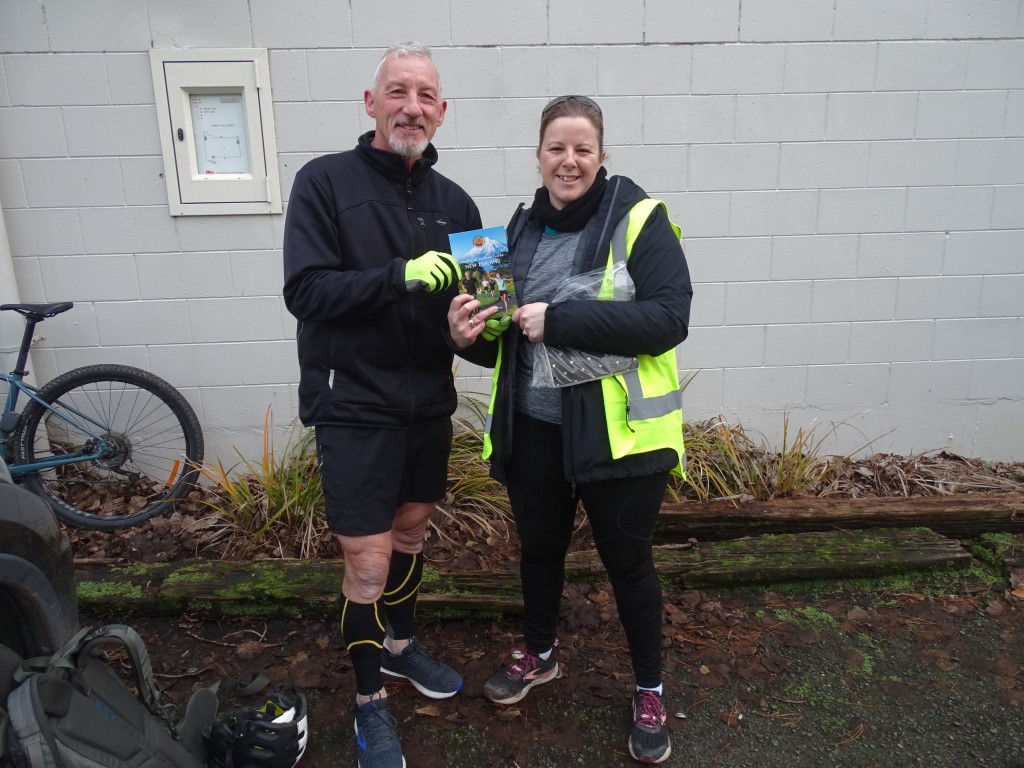 As this book is mostly going to head north (Invercargill being the most southern parkrun in New Zealand), we are sure that the next person who now has the book is going to keep passing the baton onwards.

It was great to see everyone enjoying themselves today. You all deserve a nice weekend and enjoy it while it lasts before we repeat our parkrun schedules again next Saturday.

This week 101 people ran, jogged and walked the course, of whom 11 were first timers and 9 recorded new Personal Bests. Representatives of 2 different clubs took part.