Today March 9th is International Women’s Day. We celebrated it yesterday at Hagley parkrun in Christchurch, New Zealand led by our enthusiastic run director, Vanessa. He she is with Modecai who took the wonderful photos. 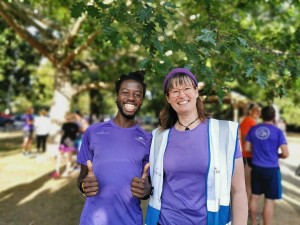 Christchurch is a city of pioneering women who make their mark on the world. Our Kate Sheppard led the suffragist movement which in 1893 resulted in New Zealand becoming the first country in the world where women had the right to vote. There is a Kate Sheppard memorial camelia walk right next to Hagley parkrun. https://www.christchurchnz.com/explore/christchurch-a-city-of-pioneering-women

We’re really happy that on IWD we achieved gender equality – of the runners that remembered to bring their barcodes, we had 216 female parkrunners and 216 male parkrunners. Perfect !

We also had someone special in the crowd who has a link to a champion of female running equality. 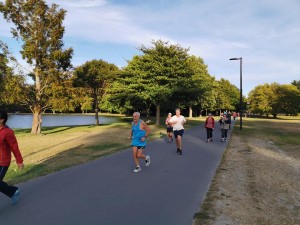 Roger Robinson joined us, and he is married to Kathrine Switzer who has done more for female running equality around the world than anyone else. She famously ran in the Boston Marathon in 1967. It had been a male only event for 70 years. During the run she was attacked by the race director who attempted to remove her from the race:

In her own words: “I heard the scraping noise of leather shoes coming up fast behind me, an alien and alarming sound amid the muted thump thumping of rubber-soled running shoes. When a runner hears that kind of noise, it’s usually danger—like hearing a dog’s paws on the pavement. Instinctively I jerked my head around quickly and looked square into the most vicious face I’d ever seen. A big man, a huge man, with bared teeth was set to pounce, and before I could react he grabbed my shoulder and flung me back, screaming, “Get the hell out of my race and give me those numbers!” Then he swiped down my front, trying to rip off my bib number, just as I leapt backward from him. He missed the numbers, but I was so surprised and frightened that I slightly wet my pants and turned to run. But now the man had the back of my shirt and was swiping at the bib number on my back. I was making little cries of aa-uh, aa-uh, not thinking at all, just trying to get away, when I saw tiny brave Arnie bat at him and try to push him away, shouting, “Leave her alone, Jock. I’ve trained her, she’s okay, leave her alone!” And the man screamed, “Stay out of this, Arnie!” and swatted him away like a gnat.

Arnie knows this maniac, I thought wildly, as I tried to pull away. The air was filled only with the clicking whirr of motor-drive cameras, scuffling sounds, and faintly, one cameraman screeching something I couldn’t understand. The bottom was dropping out of my stomach; I had never felt such embarrassment and fear. I’d never been manhandled, never even spanked as a child, and the physical power and swiftness of the attack stunned me. I felt unable to flee, like I was rooted there, and indeed I was, because the man, this Jock guy, had me by the shirt. Then a flash of orange flew past and hit Jock with a cross-body block. It was Big Tom, in the orange Syracuse sweatshirt. There was a thud—whoomph!—and Jock was airborne. He landed on the roadside like a pile of wrinkled clothes.”

You can read the rest of the story here – there’s a great video story from Kathrine too:

Kathrine went on to ensure a women’s marathon was added to the Olympic Games and started a movement named after her number in the Boston Marathon (TWO-SIX-ONE Fearless). https://www.261fearless.org/ There are chapters around New Zealand, but not in Christchurch if anyone wants to pick up the baton.

Roger has a fascinating backround too, and been around the famous moments of running history and recently released a book. Roger and Kathrine’s stories are worth reading. Thanks for joining us for our #IWDparkun Roger. https://www.facebook.com/RogerRobinsonRunning/

We have our own female hero’s at parkrun, and one of them is our superstar volunteer co-ordinator, Sinead. It was vey fitting that this was her 100th run today. Our other milestones included Paul Marriage – 100 parkruns, and 50 runs for Johnny O’Regan, Amelia Hinton and Elain Powell. 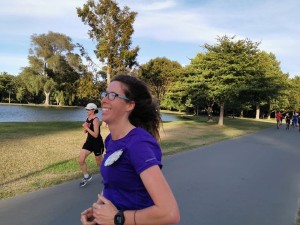 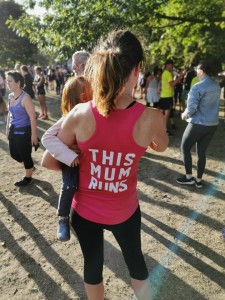 There were some great photo’s this week courtesy of Modecai - thankyou. Lot’s of evidence that parkrun makes you happy. Check them out on our facebook page. 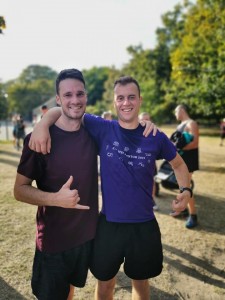 Lastly we have some exciting things coming up at Hagley parkun over the next three weeks. Watch out for these:

March 21st  Achilles takeover.  You would have seen the bright yellow runners and guides at our parkrun. The team from Achilles will fill all the volunteer roles and tell us about their plans to be at this years’ New York Marathon. https://www.facebook.com/achilleschristchurch/

March 28th  Can Run takeover. Athletics Canterbury will be providing all the volunteers and promoting their Can Run series. https://www.canrun.nz/