Saturday 13th July was a crisp, cold, 2 degree morning in Hagley Park. At 7.45am things were relatively quiet with more volunteers than runners milling about, but the volunteers were confident, they knew the hardy parkrun regulars would show up – rain, hail, sleet or snow! And they were right, numbers were up significantly from last week with 257 dedicated humans (and a few canine companions) bounding out of their warm cozy beds to walk, jog, trot, wheel, run and gallop around the well worn path of Hagley parkrun

Run Director Brad expertly hushed the exuberant crowd for the pre-run briefing and we welcomed 28 first timers, 14 of whom were running their first parkrun ever! Welcome to the parkrun family team, we hope that you enjoyed your run and will be back for more next week (be careful, some say it’s addictive!). 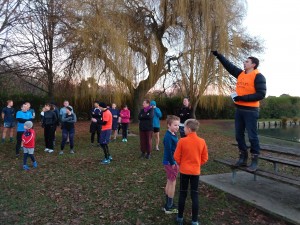 Brad making sure everyone gets to hear the briefing

We welcomed visitors from such far away places as Rolleston, Pegasus, Dunedin, Kapiti Coast, Australia, Scotland, Parramatta, Cornwall, Wales, and even Northern Ireland! Welcome to you all and thank you for including Hagley on your travels. We wish you a safe onward journey and hope to see you again soon.

We congratulated Anna REID on her 100th run and her supporters were on hand with clackers to ring in this fantastic achievement. Well done Anna!

After the promise of a glorious sunrise and a reminder to keep left Brad sent us on our merry way, the start had the usual obstacles of tree roots, lake and trees to navigate and today there was a dash of mud to keep us on our toes too. 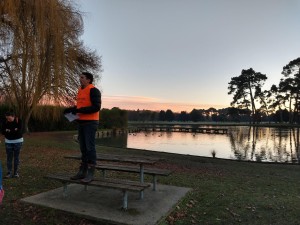 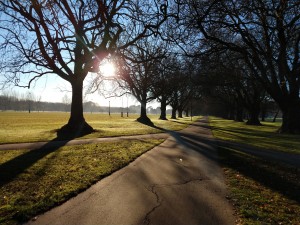 The doggos of parkrun were chomping at the bit, barking and running circles around each other in the excitement of the off but they were soon brought to heel by their humans who were focused on the task at hand - a new PB perhaps?

We rounded the lake and hit the path and the lilting refrain of a steadfast volunteer rang out “KEEP LEFT” and “Don’t mow down the other park users!” the response from one courageous parkrunner was “Why the hell not?”. But it wasn’t this volunteers first rodeo and his instant reply was “BECAUSE I SAID SO!!!” Nothing like a bit of banter and a giggle to set the tone for the run and the day ahead.

As we made our way around the park, the sun rose and the birds fluttered up into the safety of the trees, startled by the sound of 514 feet pounding in their direction. The time ticked by, the muscles ached in memory of last weeks run and we pushed on, ever closer to the finish line.

Before we knew it, the finish line was in sight and we steadied ourselves to run the final gauntlet between the lake and the trees, we knew that we needed to be swift and steady on our feet, there was no time to waste slipping in the mud. And … We did it! One by one we crossed the finish line. We were sweaty and we were panting but we were home and feeling very accomplished! Another run closer the next milestone and another PB perhaps? – time to head home to hit refresh on our emails until the official word came through from parkrun HQ.

In total there were 44 personal bests. Well done Team! And not only did Anna run her 100th, she also recorded a new PB, huge congratulations Anna, a great way to celebrate the milestone!

Representatives of 16 clubs took part this week. Find the full rundown of results and the complete event history on the Hagley parkrun Results Page.

"I run because if I didn’t, I’d be sluggish and glum and spend too much time on the couch. I run to breathe the fresh air. I run to explore. I run to escape the ordinary. I run… to savor the trip along the way. Life becomes a little more vibrant, a little more intense. I like that." - Dean Karnazes

Until next week parkrunners,